WHEN A PROJECT finishes I often wonder – how did it come up like this? What were the paths we wander and why they always stays strange and unpredictable? Our deeds remain still recognizable from all the influences, technical frames and limitations, but the amalgam of everything we put inside ends up as an entirely new entity. At the end your creation takes alone its way and becomes a starting point or path of somebody else’s creative process.

That’s what happened with Copista LED box – born from nothingness and necessity but then, dare to cooperation with MetroNet engineers grew up to refine and sophisticated product – reliable assistant to designers, calligraphers and artists in Bulgaria in their own steep ways to perfection.

It all started with a present while I was working on an e-commerce website of our future partner – a leading Bulgarian manufacturer of industrial LED lamps. Once he asked me “What kind of lamp do you prefer – exterior or interior one?” and for great surprise of mine he gave me one. This present dusted in a basket for a while.

The best-known way to trace a picture is on a window… if only you don’t mind of ending up with no hands. That’s why during my student years I often dismounted my mom’s cupboard vitrage and made them working as light table. One day, downed on the memory and utterly upset of senseless pain in my arms, got an carton and soon it turned out in the most laughable handmade LED box in the world. My gift lamp lighted up at last.

At one of our next meeting George Dimitrov, the manager of the company, asked if I like the lamp. I showed him my new paper LED box and (despite his wide opened eyes) in my return offered him a small gift – the idea and support if he decide to do it. Not much later he offered me a partnership – our part became design, testing and all branding and marketing stuff, MetroNet took responsibility for manufacturing and commercial part of the enterprise.

We focused our efforts in creating a product at the level of professional LED pads, but keeping price accessible for artists in Bulgaria. 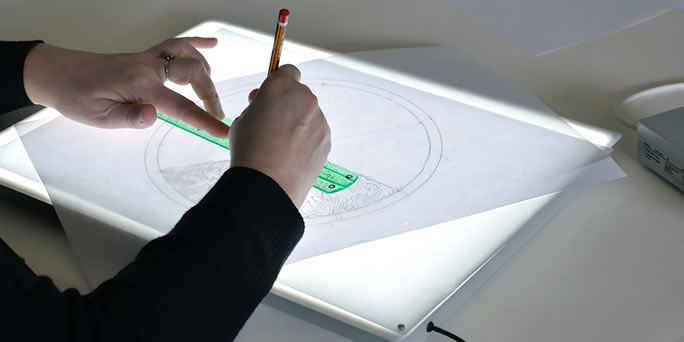 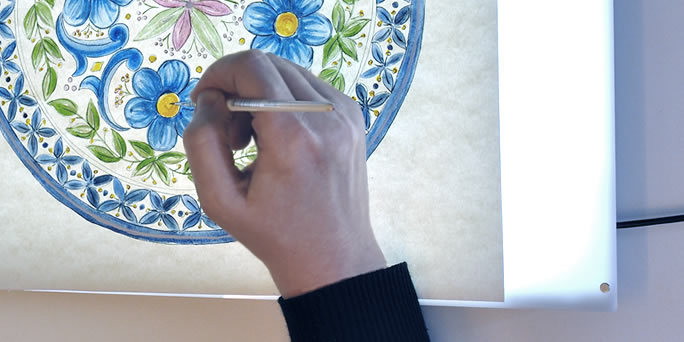 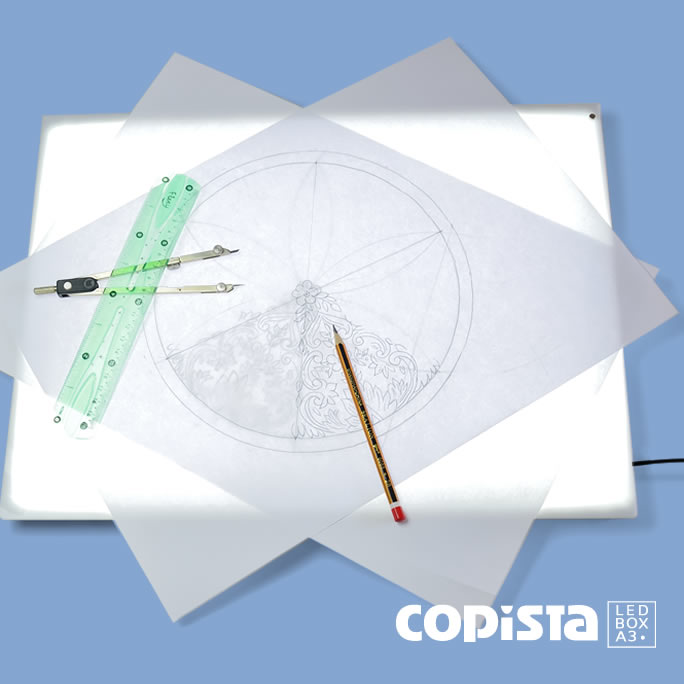 It’s great to devote yourself on something entirely and deeply, but working simultaneously on several projects also has its benefits – every time you’re back you see the task with new eyes, what keeps you away from digging deeply (often) in a wrong direction.

To refine a product is not an easy task even for people with many years experience in their trade. Specifics in creative process of artists have their requirements and suitable technical solutions were coming step by step.

Every next prototype I tested for lettering, calligraphy, logo design and graphic composition in my real projects for different clients. Every new attempt suggested us new ideas and clever technical solutions. For example the possibility to paint water colour directly on the light pad came by chance (working on a wine tag) and became reality in the pace of testing.

The fifth prototype (if we count my LED carton) granted all of our requirements and became the first LED pad for tracing, made in Bulgaria.

It is not my first time to give a name, but now the final word had the team. Here is how the resonant Italian word copista (a man copying manuscripts), became the name of our LED pad.

Logotype, colour scheme and the whole web presentation were tailored to match the main characteristics of our new product – modest in requirement for environment it works, robust, bright and endowed with longevity.

share the project
Shearing means love & support for us.
Thank you!